I took this photo myself one morning.

One of the most useful skills I acquired in my 20s was the ability to sleep on the floor. Sleeping on the floor makes staying over after parties easier, make visiting friends more comfortable, and meant that layovers and four hour delays in airports pass with much less stress.

(I should say that as I’ve moved further away from my 20s these things have become less useful: parties have got more civilised and friends have bought bigger houses. But it’s still a useful skill to have).

The problem was that it was hard(both the process and the floor). Every four months or so I’d decide that tonight was the night to become someone who sleeps on the floor. I’d take my blanket, lay down and I’d suddenly be aware that I’d never been so awake in my life. Half an hour later I’d have given up and be back in bed.

Years later, I finally worked it out. At the time, my alarm was going off in the morning at about 7am. So I set it for 5am, with the rule that I didn’t have to get up when it went off, I just had to roll, complete with duvet and pillows, off the mattress and on to the floor.

Logically, one of two things can happen at this point, either you find yourself thinking I’ve never been so awake in my life, in which case you’ve solved the problem of how to get up early in the morning. Congratulations!

More likely, because you are still tired, warm, comfortable, and relaxed you’ll go back to sleep. You are now sleeping on the floor.  Congratulations!  This is what happened to me.

The next night I set my alarm another two hours earlier, to 3am. Once again I roll out of bed, and go straight back to sleep. I kept at 3am for two nights, before going to 1am.

The reason this works is because you are taking advantage of this: 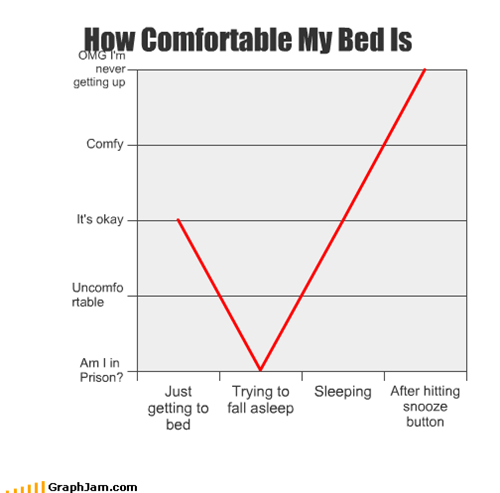 Once you are at 1am, you are spending most of the night sleeping on the floor; you’ve got comfortable, and you’ve lost the mental block you had. So by the end of the week I was comfortably lying down on the floor and drifting off with no problem. It’s an approach I highly recommend.

I’ve also used the same method to switch to sleeping on my left side and sleeping on my back, when I had problems with the right side of my neck, and I suspect it works for a range of other things.

10 thoughts on “How to sleep on the floor comfortably”